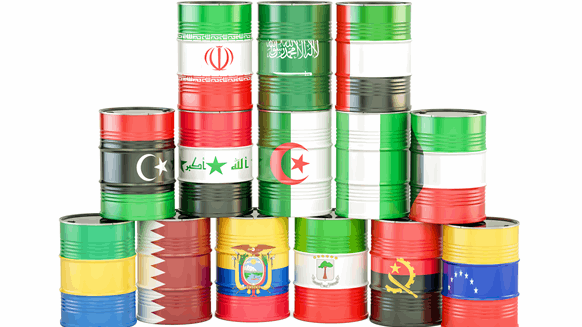 OPEC’s oil production rebounded in October from an eight-year low as Saudi Arabia swiftly recovered from an attack on its biggest crude-processing plant.

(Bloomberg) — OPEC’s oil production rebounded in October from an eight-year low as Saudi Arabia swiftly recovered from an attack on its biggest crude-processing plant.

The Organization of Petroleum Exporting Countries’ 14 members pumped an average of 29.7 million barrels of oil a day last month, an increase of 1.11 million barrels a day from September, according to a Bloomberg survey of officials, ship-tracking data and estimates from consultants including Rystad Energy AS, JBC Energy GmbH and Petro-logistics.

OPEC’s production increase last month was mainly driven by Saudi Arabia’s 1.23 million-barrel a day recovery in output to 9.88 million barrels a day. There were smaller increases from Algeria, Libya and Venezuela.

In September, an attack on Saudi Arabia’s energy facilities temporarily halved the world’s biggest crude exporter’s output and highlighted the fragility of global supply chains as well as the vulnerability of an industry that is the kingdom’s lifeblood.

The oil producer group and its allies, known as OPEC+, are due to meet in December to discuss whether steeper cuts to crude supply will be needed to shore up prices amid a surplus and signs of weaker demand. A renewal of January’s 1.2 million-barrel-a-day output cut is widely expected, yet there have been calls from banks for the alliance to deepen them further when it meets in Vienna next month.

OPEC’s steepest production drop last month was in Ecuador, which suspended major oil fields and halted crude sales amid protests against government austerity measures, before it later managed to lift force majeure. The country saw its output plunge by 120,000 barrels a day in October, down to 420,000.

Iraq’s output decline wasn’t far behind Ecuador’s, with a 100,000-barrel a day drop, down to 4.68 million barrels a day. Yet, OPEC’s second-largest crude producer still wasn’t compliant with its OPEC+ cuts target. Nigeria, which produced 20,000 barrels a day less in October, was also under-compliant. Crude output also fell in Angola, Iran and Kuwait.

FHA cash out refinance guidelines and mortgage rates for 2019